The brain-gut connection and its role in our well-being Do you remember a time when you experienced butterflies in your stomach? I had a crazy bout of butterflies just today, thanks to my new research project! But this is completely normal, and we all experience it at some time or other. Butterflies are usually associated with a strong emotion (anxiety, nervousness, or even love) and can be so strong that they leave us feeling nauseated. Despite not always being a welcoming experience, this common sensation is caused by our gut-brain connection.

The communication system between the gut and brain is called the gut-brain axis. This axis is a bi-directional, complex biochemical and physical pathway. There are approximately 500 million neurons (nerve cells) in our gut that communicate with the brain via the vagus nerve [1, 2] (the longest cranial nerve), the endocrine system (responsible for producing hormones), and neurotransmitters [3] (molecules used by the nervous system to transmit messages). What is super interesting about the neurotransmitters is that some of them are also produced in the gut, including our sleep-promoting neurotransmitter gamma-aminobutyric acid (GABA) and our feel-good neurotransmitters, serotonin and dopamine. This means that what is happening in our gut directly influences our feelings and vice versa.

Excitingly, there is new research investigating the role of the gut-brain axis in association with mood and psychological disorders, in addition to many other chronic diseases. With an estimated 45% of Australians experiencing a mental health condition in their lifetime (Australian Bureau of Statistics, 2008), there has never been a more important time to understand this connection. 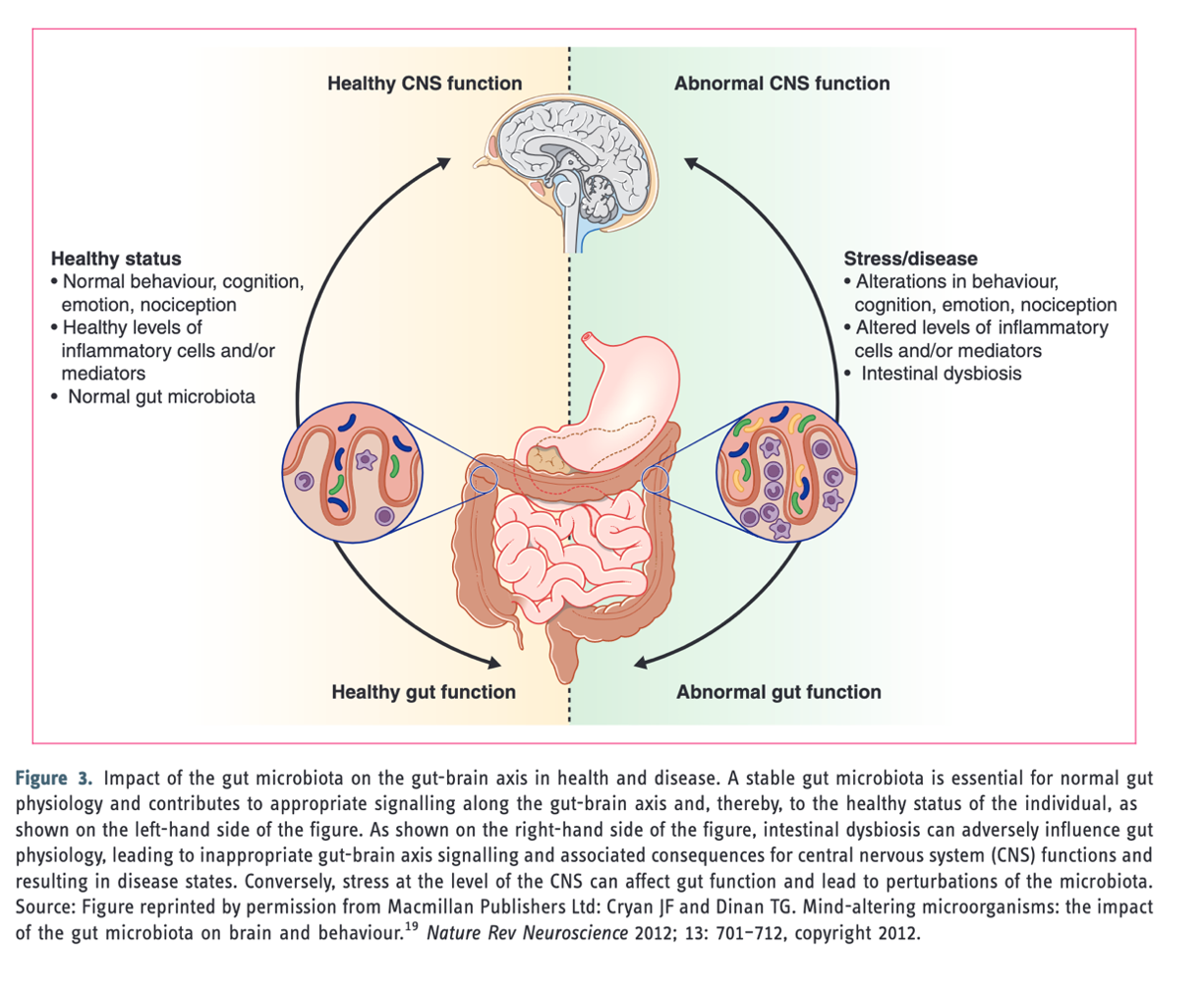 More recently, it has been discovered that there is an additional factor to gut health, which is our gut microbiota. [4] Microbiota refers to microorganisms such as bacteria, viruses, and fungi that inhabit our gut. These tiny little organisms are not only important but are, in fact necessary for life.

The human gut is a diverse and complex community with around 1014 bacteria, the main gut microbe. [4] Research has shown that bacteria can metabolise other substances that also have an impact on how our brain functions. Bacterial fermentation of fibre produces butyrate, a short-chain fatty acid with important brain benefits such as improved memory, cognitive flexibility, nerve growth (in an injured brain) and improved mood. [5] The microbiota also plays a crucial role in the immune system and inflammatory processes, which are important in disease prevention. Rooks and Garrett (2003) concluded that “The microbial communities, their metabolites and components are not only necessary for immune homeostasis, they also influence the susceptibility of the host to many immune-mediated diseases and disorders.” [6] However, if the immune system is stimulated for too long, it can lead to inflammation, which is associated with a number of brain disorders, including depression and Alzheimer’s. Furthermore, inflammation can cause increased intestinal permeability in the gut, and when this is present in combination with toxic compounds such as lipopolysaccharides (LPS), it can lead to serious brain disorders such as dementia, schizophrenia and bi-polar. [7, 8] Lipopolysaccharides are endotoxins found on the outer membrane of gram-negative bacteria. They are one of the most pro-inflammatory stimuli in the gastrointestinal tract. LPS are associated with a typical Western diet and directly affect both the gut and the brain.

The microbiota-gut-brain axis is a rapidly growing area of interest. In addition to the association between our mental health and dysbiosis (microbial imbalance), recent studies have also found associations with metabolic syndrome, diabetes, heart disease, Crohn’s, Ulcerative colitis and irritable bowel syndrome (IBS).

It’s unclear about the exact pathogenesis (disease progression), but “when the balance of intestinal microbiota is broken, the intestinal defense function and immunoregulatory function are decreased, the immunity of the body is reduced, and the relative pathogenic factors are increased so as to cause the intestinal mucosal invasion or aggravate the diseases.” [9]

Knowing the association between gut health and our overall health presents scientists with novel approaches to these conditions. The future for some disease management may be found more so in food than in pharmaceuticals.

As scientists discover more about the microbiota-gut-brain axis, they are also able to identify how we can improve our gut health. It is now established that the ratio of “good” to “bad” bacteria has significant effects on our physical and mental well-being. There are a number of things that upset the balance of bacteria in our gut, including: 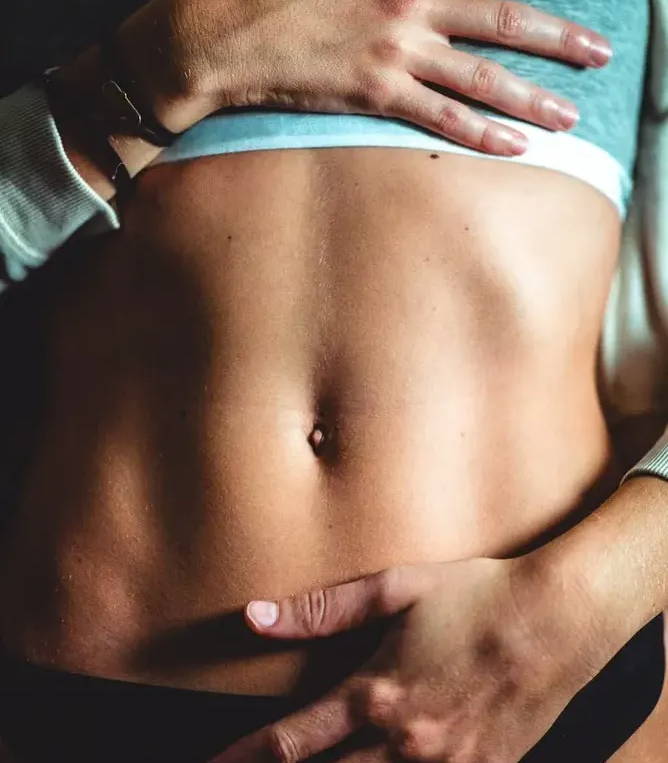 Now before you start freaking out about your gut health, it’s worth pointing out that our microbiota is very fluid and will rapidly change in response to stimulus. This means that if you have a weekend of heavy drinking, no exercise and less than desirable eating, whilst your microbiotawill be affected by this, itwill rapidly change backwhen you resume your regular diet and exercise routine.

And whilst it’s not always possible to avoid everything in the list above, thefollowing area few sensible strategies for improvingoverallgut health:

Recent research has shown that exercise has been shown to improve our microbiota. [10] It is well established that exercise is important for mental health and well-being, but this research indicates a different route of benefit. 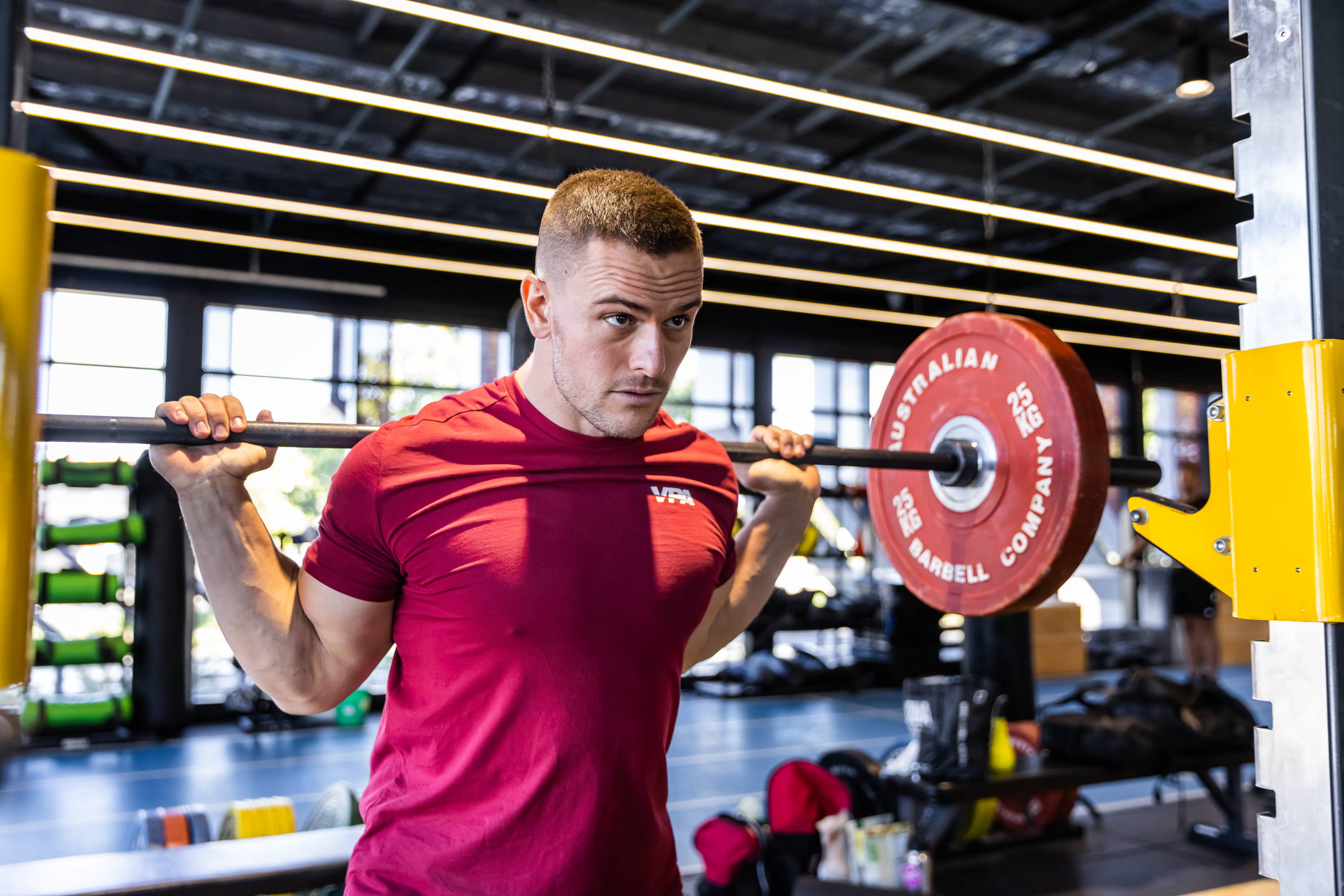 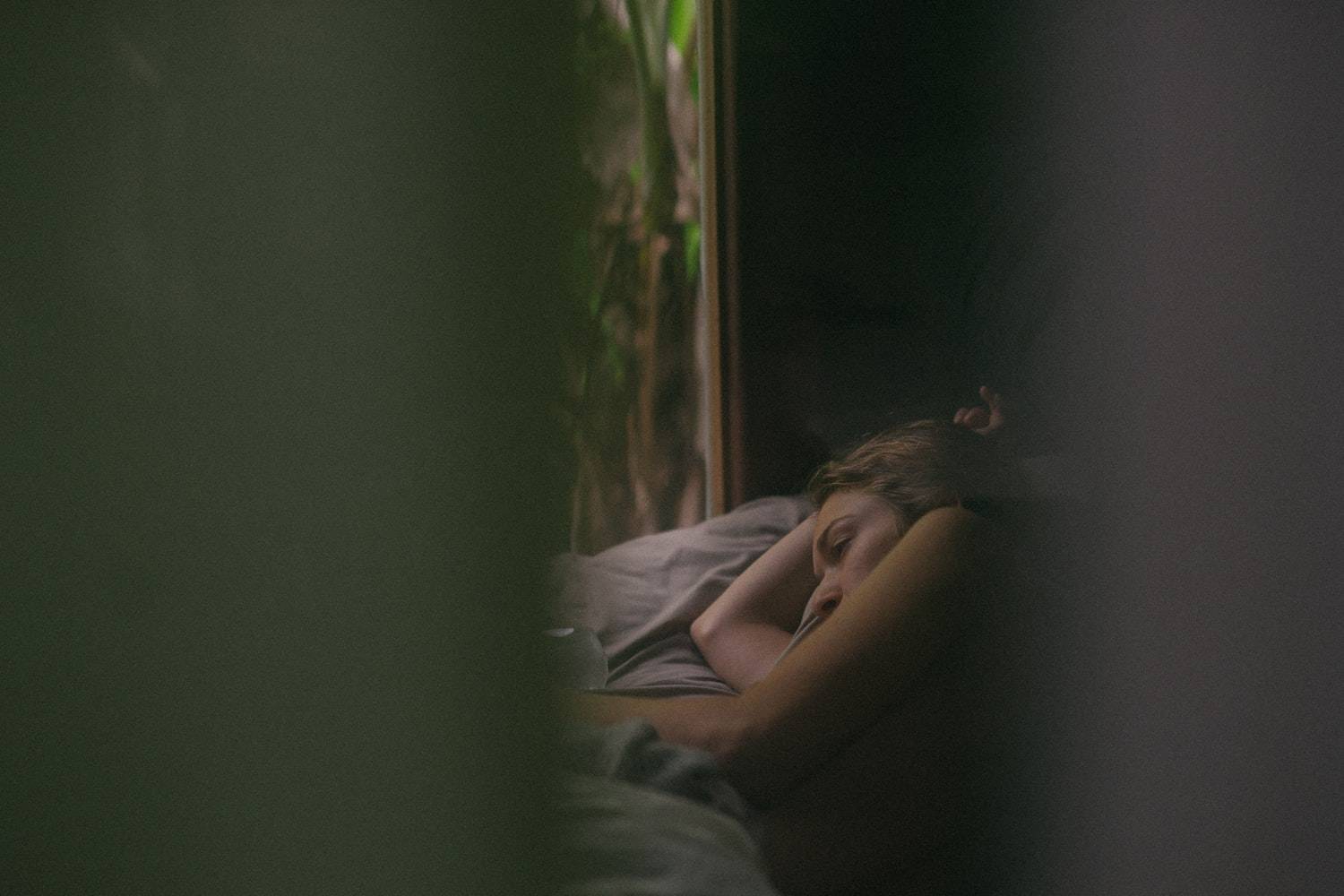 Vitamin D is a relatively new area of research in the gut health field, but some evidence suggests a low vitamin D status is associated with depression. [12] There is also an association between vitamin D status and butyrate levels. [13] If you cannot get enough vitamin D from the sun, it may be worth considering a supplemental form. 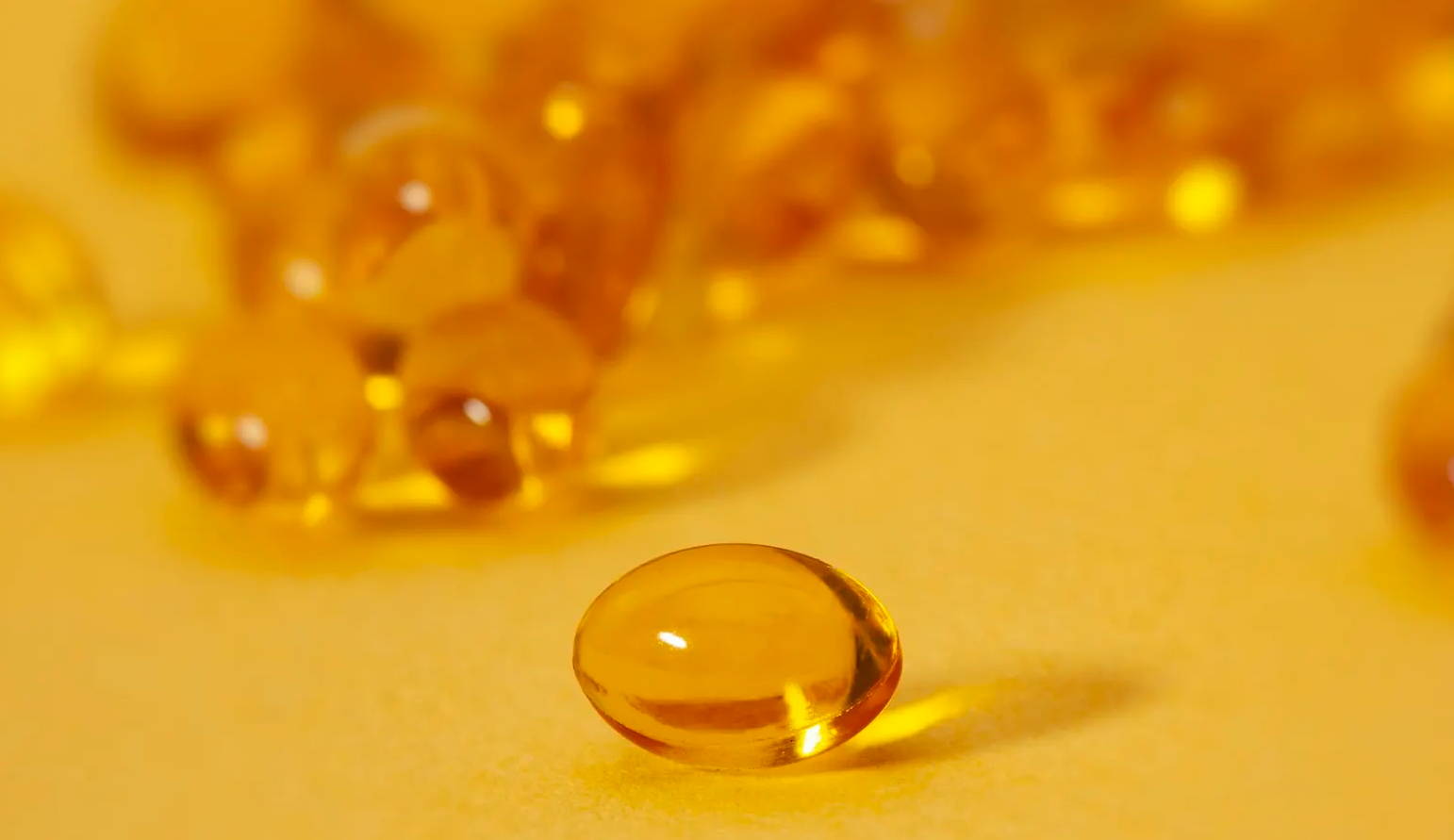 Prebiotics are types of fibre that pass through the gut undigested whilst stimulating the growth and/or activity of good bacteria. In this way, prebiotics can be thought of as food for probiotics. According to Monash University, the following foods are high in prebiotics: 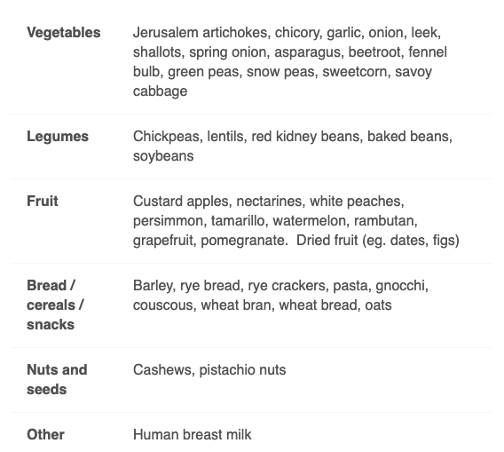 Probiotics are live microorganisms that, when consumed, are intended to have beneficial effects on the body. Common probiotic strains include Lactobacillus and Bifidobacterium and can be bought as a probiotic supplement from most chemists and health food stores. However, probiotics are also found in everyday foods such as yogurt, sour cream, buttermilk, cheese, kimchi, sauerkraut, miso, pickles and kombucha. The jury is still out on whether supplementing with probiotics is necessary when someone is otherwise healthy. However, including a range of probiotic foods with prebiotic fibres is a sensible strategy for improving microbiota number and diversity.

Faecal microbiota transplantation (FTM) is a relatively new area of research whereby disease is treated through a faecal transfer from a healthy person to one with a disease. It is significant, emerging evidence for FMT; however, it is not a “one-size-fits-all” intervention, but rather it must be tailored to the individual. [14]

And there are some great evidence-based supplements. Here are my top 3 from VPA.

Protein is necessary for every single process in the body, especially a healthy immune response, which plays a pivotal role in the gut. Animal sources of protein also provide us with lovely amounts of glutamine (see next point), which makes WPI or casein an ideal choice. And for the science nerds, research has shown that the gut microbiota mediates the crosstalk between protein metabolism and host immune response. This means that having adequate protein in our diet, which many women do not, is important in terms of overall gut AND immune health.

Sold out
Sold out

Glutamine plays an important role in maintaining the integrity of the gastrointestinal barrier. It prevents intestinal permeability (aka leaky gut), which is important for keeping harmful bacteria or toxins from moving within the intestines into the rest of your body.

I like this product for two main reasons. Firstly, as someone getting a little older and noticing my skin isn’t quite what it used to be, I am all about collagen. There is some evidence to suggest that collagen assists with improving skin appearance and elasticity. Sign me up! The second reason for loving this product is because it also contains a lovely probiotic culture called Bacillus Coagulans. As an IBS sufferer, this strain of probiotics has been shown to improve IBS symptoms (aka the mad dash to the bathroom). This supplement also contains inulin, which helps feed the good bacteria and potentially assists in promoting a healthy immune system. What a killer product!

Gut health is an emerging area of research that promises novel approaches to the treatment and management of many diseases including dementia, mood disorders, metabolic,cardiovascular and gastrointestinal diseases.

Not surprisingly, some of the best recommendations for improvingourgut health, are identical to those for improving our overall health and well-being. Theseincludenot drinking too much, not smoking,eating a healthy and varied diet, getting enough sleep, reducing our stress levels , and doing regular exercise. Naomi started in the health and fitness industry in 2000 working as a PT for Fernwood Women’s Health Clubs, while she was completing her dual degree in Clinical Exercise Physiology and Education. Whilst on maternity leave with her twins in 2011, she started her business delivering education programs to fitness professionals. In 2018, Naomi completed her post-graduate studies in nutrition, through Deakin University. Currently, she is working towards her PhD and is involved in the Brain Training Trial at the University of Queensland, which is investigating the role of high intensity interval training and progressive resistance training to improve mild cognitive impairment.